Finding the right support to kick-start a career

After gaining his degree in Environmental Science, Hamsa Farah was excited to start his professional career. However, he found that as a young person from a culturally diverse background, not only did he lack relevant experience but he also lacked connections and faced additional challenges when competing for work opportunities.

Hamsa had been looking for work for six months when he approached Jobs Victoria Partner Brotherhood of St Laurence for support. They worked with Hamsa on his CV and interview skills and encouraged him to volunteer at different events and participate in community initiatives to widen his network. 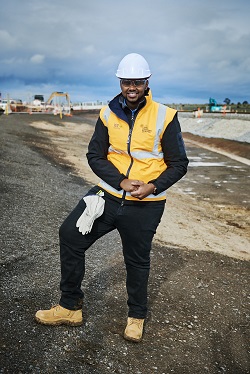 First Hamsa secured a role one day a week managing community markets, which was not enough work but fulfilled a short-term goal to gain management skills.

When the role of Graduate Sustainability Advisor at the Western Program Alliance came up it was clear Hamsa was perfect for the role. He gained an interview and landed the job.

Hamsa is now employed by the Western Program Alliance as part of the Level Crossing Removal Project. He is making a great impact in the role, where his enthusiasm and positivity are greatly valued by his employer. Hamsa is happy to be working in his chosen field and “contributing to a better society.”

The Western Program Alliance (WPA) comprises of McConnell Dowell, MTM and V/Line. The Level Crossing Removal Project (LXRP) was established by the Victorian Government to oversee the largest rail infrastructure project in the state's history.

Central to the project is the elimination of 75 level crossings across metropolitan Melbourne by 2025, in addition to upgrading or constructing more than 27 train stations, laying many kilometres of new track and making associated rail improvements.

In 2015, the Level Crossing Removal Project (LXRP) adopted a Sustainability Policy to ensure the principles of environmental, social and economic sustainability were included in all projects.

Find out more about the Brotherhood of St Laurence.