Creating a platform for success, at any stage of life

Sophie Bovell and Peter Blair are just two of 15 Jobs Victoria participants who have got their careers ‘on track’ by landing jobs they love with Metro Trains.

After finishing school, Sophie struggled to find ongoing employment. She was experiencing challenges in other areas of her life, including home and family, and her confidence and motivation were affected. Sophie sought help from Jobs Victoria Partner Whitelion, who worked with her to improve her confidence and job-seeking skills.  When she was job-ready, they introduced her to Metro Trains and she was successful in securing the role of Driver Sign-On Officer. 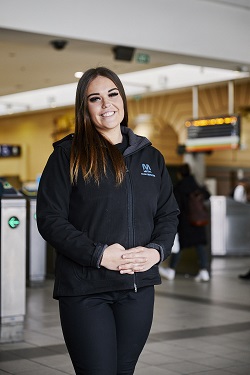 Peter found himself looking for employment at the age of 72. He had retired a number of years earlier but felt lonely and disconnected out of the workforce.  “I thought going back to work was not really an option, as work opportunities at my age are very limited,” says Peter.

He connected with Jobs Victoria Partner Jesuit Social Services (JSS), who helped him prepare a CV and apply for a range of positions. When JSS told him that Metro Trains was recruiting for customer service roles, “I knew right away it was a role that I was suitable for and that I would enjoy,” Peter says. Peter was one of 2,500 people interviewed for 45 roles and was successful in securing a position. He loves his role and says it has improved his overall outlook on life. “I love going to work and interacting with customers every day. This is the type of job I was looking for and I am so grateful for the support of Jobs Victoria.”

As Melbourne’s metropolitan rail service with 15 lines, 219 stations and services seven days a week, Metro carries more than 800,000 passenger journeys each day on a fleet of more than 220 trains and more than 900 kilometres of track.

Metro manages a socially responsible employment program as a key part of its current recruitment strategy. Jobs Victoria has been working with Metro Trains for almost two years to support their commitment to employ jobseekers who face barriers.

So far 15 Jobs Victoria participants have been employed with Metro Trains in a diverse range of roles including Administration Officers, Graduate Engineers, Station Assistants and Train Drivers. Metro’s selection and recruitment processes have not been amended to cater for Jobs Victoria candidates, each jobseeker has secured their role on merit.

The partnership between Jobs Victoria and Metro continues and we look forward to seeing even more jobseekers getting onboard.

Find out more about Whitelion.

Find out more about Metro Trains.