A young life nurtured: “Through every dark night, there’s a brighter day”

Newton Paye is 18. As a baby he escaped the Second Liberian Civil War and at seven years old, living in Guinea, he became an orphan. For the following three years he did what he could to survive.

In 2009, aged 10, Newton arrived in Australia as a refugee and moved in with his aunt and seven cousins in Sunshine. At 16, his living situation became precarious and his relationship with his family broke down. Newton sold his belongings to pay rent and was surviving on less than fifty dollars a week. He managed to stay at school and finish year 12 but he faced homelessness and despair. 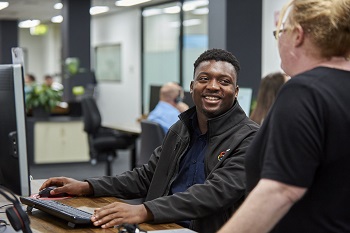 “I had a dark cloud over me … no one really knew how to help me.”

Newton was introduced to Paul Singh at Jobs Victoria Partner WCIG in Sunshine. With the support of people who genuinely believed in him, Newton was able to shift his mindset from survival-mode to longer term goals. WCIG connected Newton with David Ward from AGA. Together, they set their sights on an administration traineeship.

Newton felt relief. “These guys believe in me, and they see that I have potential. It made me realise that if you put in some effort … it’s possible”

Within a couple of weeks Newton had three interviews lined up and was offered all three positions.

He commenced an Administration Traineeship with Metro Tunnel RIA in March 2019. Gregg Rafferty, Social Procurement & Inclusion Manager at Metro Runnel RIA, says Newton’s success is testament to the support he has been provided, but” it’s also a result of Newton as a person, and his ambition and drive.”

Paul has continued to support Newton throughout his traineeship and provided wrap-around support, including arranging secure and stable accommodation.  Thanks to Newton’s determination and the hard work of the people around him, Newton is thriving at work and has recently started studying Engineering at university part-time.

In just one year, Newton’s life has completely turned around. “With these guys by my side, it’s amazing …. Look how far I’ve come, things can change … Through every dark night, there’s a brighter day.”

Find out more about WCIG.